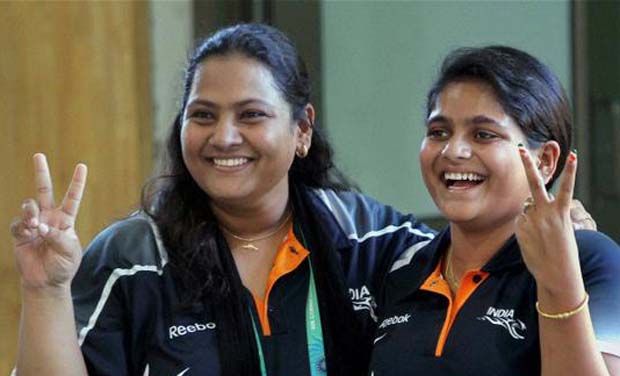 India’s best sports pistol shooters Rahi Sarnobat and Anisa Sayyed have been given a chance to win the Olympic quota in the Asian Olympic qualification competition to be held at the Dr. Karni Singh Range, New Delhi, from January 25 to February 3.

The two, with a string of achievements in the event, including gold medals in the Commonwealth Games, had earlier been kept out of the team for the Asian championship in Kuwait which originally offered 35 Olympic quota places for Asia before the International Olympic Committee (IOC) revoked it.

The strong performance of Rahi and Anisa, who finished with the gold and silver medals in the women’s sports pistol, at the ongoing 59th National Shooting Championship, could haven been a reason for the final nod by the National Rifle Association of India (NRAI) for the Asian Olympic qualification competition.

Even though the technical committee which met on November 23, had recommended that the scores of the national championship should not be considered for selection of the team for the Olympic quota competition, there is a clear message that the attempt would be to “maximise the number of quotas”.

In women’s sports pistol, Annu Raj Singh (569), Heena Sidhu (565) and Gauri Sheoran (563) had placed 20th, 22nd and 28th respectively in the Asian Championship in Kuwait which was originally the Olympic quota event as well, before the International Olympic Committee (IOC) revoked the status.

Interestingly, the 25-year-old Rahi, who had finished seventh in the last Asian Games in Incheon, and Anisa are ranked only behind Annu Raj Singh in the overall averages for the season. The selectors had opted not to look at the criteria of “Minimum Travel Score” for the quota event, but had yet dropped the two from the Asian championship.

At a venue where they had won the gold and silver in the Commonwealth Games in 2010, and had switched positions on the podium in the last Commonwealth Games in Glasgow last year, Rahi and Anisa, definitely are the best bet to win the Olympic quota in sports pistol, in the overall perspective.