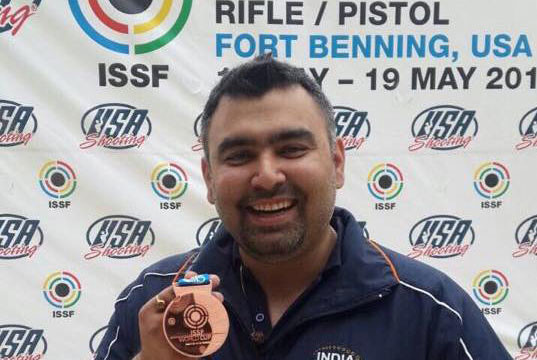 Gagan Narang won the bronze medal in the Men’s 50m Rifle Prone at the ISSF World Cup being held at Fort Benning in USA, earning a quota place for the 2016 Rio Olympics.

Narang, who won the bronze in 10m Rifle at the London Olympics, shot 185.8 overall to secure third place behind gold medalist Michael McPhail (208.8 points) of USA and Ole Kristian Bryhn (206.3) of Norway. The other quota place from the event went to McPhail.

Earlier in the competition, Narang and India’s only individual Olympic gold medallist Abhinav Bindra, had failed to qualify for the 10m Rifle final.Narang is third Indian shooter to make the Rio cut after Jitu Rai and Apurvi Chandela. Chandela had secured the quota place by winning the bronze in the 10m Rifle at World Cup in Korea last month.

Each country can win a maximum of 30 quota places from a total of 15 shooting disciplines (including shotgun events), two each from each discipline.