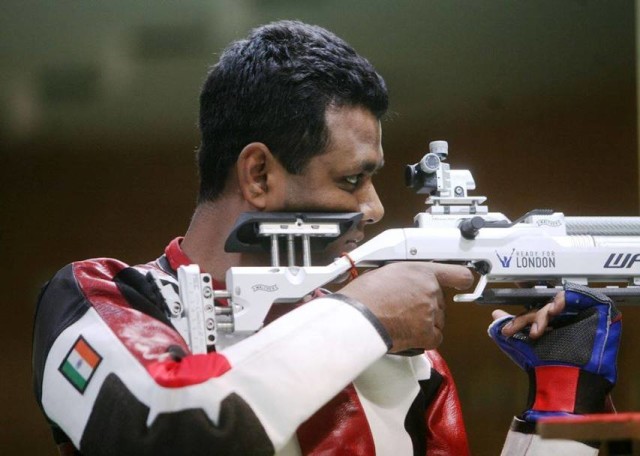 Bhagpat District Rifle Association in Uttar Pradesh had organised a shooting competition recently. It was great to see so many shooters turn out for this competition from neighbourhood villages which showed the growing popularity of shooting sport in this region.

I had the oppurtunity to meet many shooters from nearby villages including Mahejabeen Banu from a village in Amethi. Banu shoots with her club’s very old air pistol which originally belongs to Rahul Gandhi.

The young girl was introduced to shooting in a shooting camp organised in her village in Amethi and since the day she held an air pistol for the first time, her life has completely changed. From a small village girl she now dreams of becoming a world class shooter and thats all what she wants to be, “I just want to be a top shooter in my life and nothing else” said Banu.

The sport got her admission in the prestigious St Stephens’s college in Delhi and a scholorship in Air India. “When I started shooting, people in my village use to discourage my family by saying that it’s not good for our family girls to play with guns and travel alone but now the same people want to put their daughters in shooting, they all are very impressed with the fact that I travel free by air for my competitions all over the country” said she with a smile.

Banu’s journey till now has been full of hurdles, she lost her father who was mudered by gangsters a day after she reported for a shooting camp in Johri village. Even such a setback did not stop this brave girl from following her passion, she went on to shoot 370/400 at the National Championships. She gets a monthy scholorship support and free air travel by Air India. She shoots for 3-4 hours every day at her college range as she stays in the college hostel. “I shoot much better in training but get nervous in competitions, If I get some training to control my mind I can shoot much better scores” said Banu. indianshooting.com