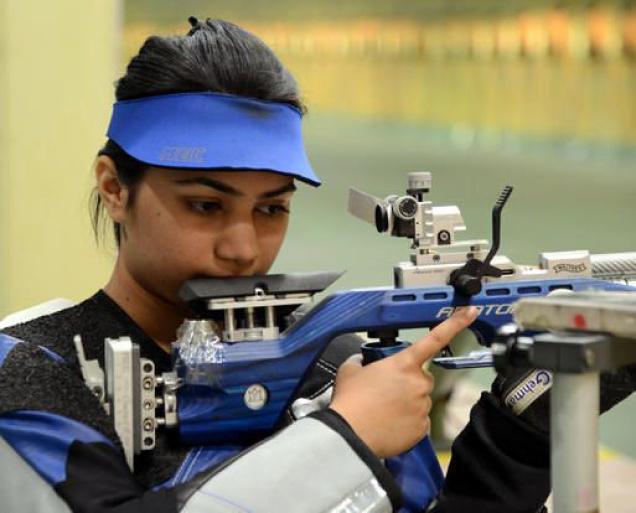 The thing that strikes you most about Apurvi Chandela is her cool demeanor. Possibly one of the best shooters to have emerged onto the national scene in recent times, her performance has been mind-boggling. At such a young age she is a Commonwealth Games and World Cup medalist, and this is just the start for the shooting prodigy from Jaipur.

indianshooting.com caught up with the small-town girl who has set her sights high and is willing to achieve her goals. Excerpts:

How do you rate your performance at the ISSF World Cup at Korea?

I shot my personal best there. Having said that, after the qualifying round, I knew I had a good chance of securing a quota place. I tried to keep my nerves calm.

How has your family and your city reacted to your recent success?

My family is the reason why I have reached this far. They have been my pillar of strength. They are always encouraging me and they enjoy watching my matches. In fact, 12 of my family members were there to support me in Glasgow during the Commonwealth Games. My city, Jaipur, has given me a lot of love, and I’m glad to see so many youngsters take up shooting.

What’s your training strategy going to be from now on?

I have a lot of important matches coming up. I will focus on getting my fitness levels high and also on recovering fast after each match.

Coming from Jaipur, which did not boast of a big rifle shooter, who inspired you to take up rifle shooting?

What are the gray areas, if any, your coach has worked upon in your shooting that have really helped you?

Were you expecting a medal at the World Cup when you boarded the flight for Korea and how would you rate your World Cup bronze vis-à-vis the gold you won in the Commonwealth Games last year?

To perform to the best of my abilities is what I had in mind. I was in good form and hoped to execute my match plan well and stay calm. They both hold great importance for me as Commonwealth was my first major international gold, whereas in terms of the competition level, the World Cup was definitely a bigger challenge.

Heard you had a ligament tear just before the Commonwealth Games. What happened?

Yes I had a ligament tear a week before my match. There were good physiotherapists and doctors who were treating my leg and trying to hold it together till my match, and on the day of the match, I had so much more to focus on that I just had to keep the pain aside and play my game.

After your WC success, expectations of an Olympic medal will rise. How would you cope with that pressure and keep yourself committed at the same time?

I believe in focusing on what I can control. Expectations and pressure are there now also, but I take in stride and concentrate on the task I have in hand, which is my match.

After winning the Olympic quota and the CWG gold, do you think you have snatched the limelight from other women shooters in India?

Not at all, we have extremely talented women shooters in our country who are doing well.

How has the response been on social media?

I have received a lot of support and love. It feels great to have well-wishers, who want me to succeed and I hope that I can deliver good performances in the forthcoming matches and make the country proud.