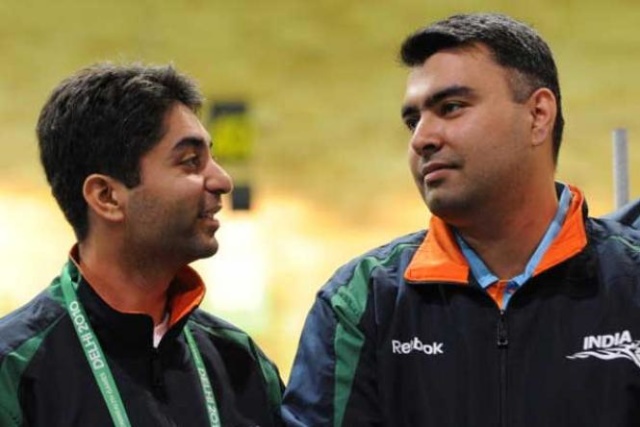 Star shooters Abhinav Bindra and Gagan Narang will be the cynosure of all eyes while Chain Singh would be looking to defend his title as the Indian shooting squad begins its campaign in the 8th Asian Airgun Championship on Sunday.

All the three shooters have secured quota places for next year’s Rio Olympics.

Abhinav and Gagan were seen training on Saturday evening, trying to set their body clocks according to Sunday’s match time which is post lunch followed by finals in the evening.

The second day will see the likes of Apurvi Chandela, Ayonika Paul and Pooja Ghatkar in action in Women’s 10m Air Rifle. While Chandela has already earned an Olympic quota, the others are working hard towards their stated goal. Like Chain, Pooja would also be looking to defend her title won last year when the event was held in Kuwait.

The September 27-30 event precedes the Asian Shooting Championship at Kuwait in November — the last event for shooters from the continent to win quota places before the quadrennial sporting extravaganza begins in less than a year from now.

“It will be good preparation for Rio. I’ll be using this competition as preparation for future. I am training everyday. The range looks better, the lights are more constant,” Bindra, India’s lone individual Olympic gold medal winner, had said when asked about the significance of the tournament.

Other top shooting countries which will be seen in action include the likes of Korea, Chinese Taipei, Kazakhstan, Iran, Mongolia, Japan and Singapore. India’s neighbours — Bangladesh and Bhutan — have also confirmed participation.