Another quota-less day for Indian shooters 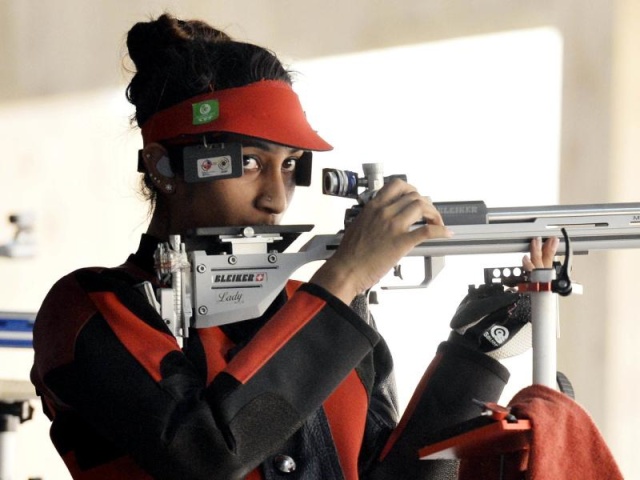 Indian shooters failed to bag a quota place for the second day in a row at the Asian Olympic Qualifying Competition for Shooting in New Delhi.

It was a fine performance by Elizabeth in the morning when she shot 580 out of 600 in difficult weather conditions, to qualify for the final in the sixth place. In the final, Elizabeth stayed in the race for one of the three Olympic quota on offer right through the 30 shots in kneeling and prone positions. However, she slipped a bit in the standing position and eventually lost the race for the quota and the medals by three points to the Korean, Lee Kyerim.

Elizabeth, the lone Indian in the finals, finished fourth with score of 430.5. The event had a total of three quotas and a podium finish could have ensured a quota.

Jasmine gave early indications of her determination to claim an Olympic quota when she topped the qualification round with a score of 586 to enter the finals.

Through the entire length of the 45-shot final round split between the three positions of kneeling, prone and standing respectively, Jasmine remained in the top two except briefly at the end of the prone series, when she slipped to fourth.

Korea’s Kyerim Lee was giving her company at the top displaying amazing consistency, while Mahlagha and Elizabeth were engaged in a fight for the bronze medal position.

But after the first five series of the standing round, Jasmine cemented her place at the top and following a disastrous 47.1 by Elizabeth, the Iranian and Korean shooters had pulled away from the rest of the field to fight for the silver and bronze positions.

In the Women’s 25m pistol event, none of the three Indians could qualify for the eight woman final after Rahi Sarnobat finished 12th with a score of 575, Anisa Sayyed was 17th with 572 and Annu Raj Singh 21st with 570 after two rounds of qualifying.

Korea swept the medals in this event with Koh Eun winning gold, Munjung Kim fetching the silver and Ji Hye Kim finishing with the bronze medal. The three Olympic quotas in the event were won by Korea (who could claim only one quota in the event as they had won one earlier).