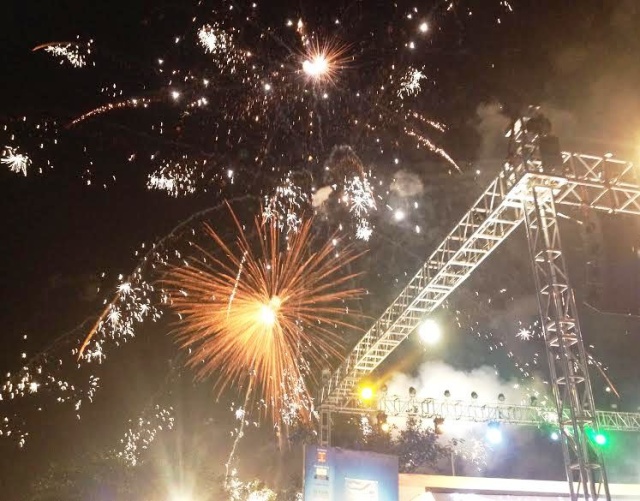 The 8th Asian Airgun Championship opened with a spectacular ceremony at the Dr. Karni Singh Shooting Range in New Delhi on Friday.

The guests from participating countries were seen enjoying the performances by a rock band followed by colorful dance performances by various groups. However the highlight of the evening was the impressive fireworks illuminating the evening sky above the picturesque shooting range.

The 2012 London Olympic bronze medallist Gagan Narang took the athletes’ oath while Bhutan’s Crown Prince Jigyel Ugyen Wangchuck who was the guest of honour for the evening, declared the competition open.

The chief guest for the opening ceremony – Sports Minister Sarbananda Sonowal arrived after the ceremony was over and joined the other guests only at high tea.

India’s only individual Olympic gold medallist Abhinav Bindra was also not seen at the ceremony. The ace shooter usually prefers to skip such events.

A total of 180 shooters from 14 countries will be participating in the four-day competition, with hosts India fielding the largest squad of 56 shooters across the senior, junior and youth categories.

The revamped shooting range looks all set and ready for action over the next five days. A total of 180 shooters from 14 countries will be participating in the competition, with hosts India fielding the largest squad of 56 shooters across the senior, youth and junior segments. All seven of India’s Olympic quota winners in rifle and pistol events — Abhinav Bindra, Gagan Narang, Jitu Rai, Gurpreet Singh, Apurvi Chandela, Prakash Nanjappa and Chain Singh will be seen in action.

The range has undergone renovation and the shooters seemed happy. “Everything is refurbished, whatever was needed has been provided, the federation ensured that comfort and facility is available. Technical delegate from Sri Lanka visited the range to inspect it and he was satisfied — he was a representative of Asian Shooting Federation,” said the NRAI President Raninder Singh.

This is the first international competition at this shooting range after the Delhi Commonwealth Games in 2010. Given its picturesque location amid vast ramparts, the range is sure to please shooters from across Asia.