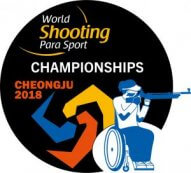 Slovakia’s Veronika Vadovicova won the gold medal with a world record of 255.0, silver was won by Matt Skelhon of Great Britain with 254.3 while Korea’s Jinho Park took the bronze with 232.9.