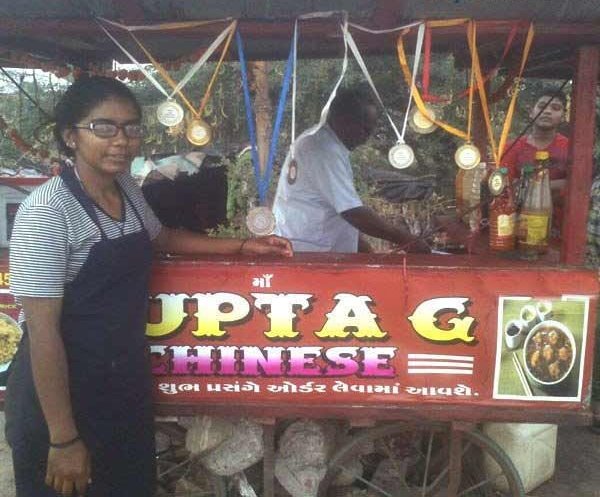 The sight of her medals hanging from a roadside cart in Vadodara is enough to tell you the story of this 21-year-old shooting champion.

A national-level shooter has been forced to sell noodles on the streets of Vadodara in order to earn her daily livelihood. Pushpa Gupta, who has represented Gujarat at various shooting championships, runs a roadside Chinese eatery selling noodles as lack of funds forced her to leave the sport.

The sight of her medals hanging from a roadside cart is enough to tell you the story of this 21-year-old shooting champion.

“I had joined college in 2013 and it was there that I discovered that I have skills in shooting. I joined the National Cadet Corps NCC and it supported me financially. I represented Gujarat in the sport as well. Then I started getting interested in the sport,” said, Pushpa Gupta.

She said that after the NCC course got over, she was unable to continue with the sport as it was way too expensive and the financial aid from the military organisation also ended.

“After support from the NCC ended, my father told me to discontinue with the sport and start some business in order to earn a living. Since then we have been selling noodles on this lorry and now it has over been one year,” she added.

She asserted that it has been one and a half year since she has handled a rifle. She has also put the medals won by her on the cart so that the customers know about her and her achievements.