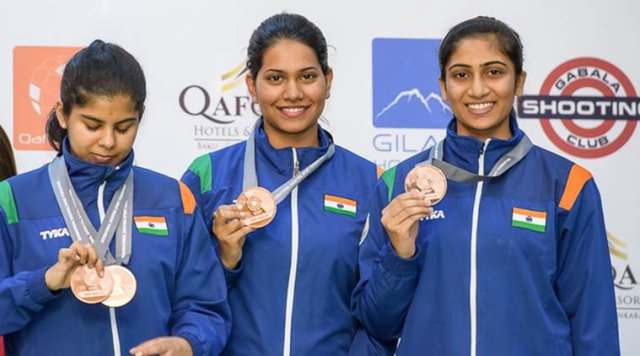 India’s junior shooters who won twenty four medals at the ISSF Junior World Cup in Gabala, were felicitated by the National Rifle Association of India (NRAI), at a function held at the Dr. Karni Singh Shooting Range on Saturday.

The team won nine gold, five silver and ten bronze medals to finish an impressive second in the overall medals tally. Russia topped the table with a total of twenty five medals including twelve gold medals.

The medalists received cash awards along with certificates. Their performance was an improvement from the fourth place finish achieved at the year’s first junior World Cup in Suhl, Germany, where the Juniors had won a total of 10 medals including three Gold medals.

Speaking on the occasion, Mr. Raninder Singh, President, NRAI, said, “Junior shooters started from scratch in the last two years and today seniors are also threatened. Apart from the performances in Rifle and Pistol events, there were excellent results in Shotgun as well. I only want to say that you are the future and you will be competing in Tokyo 2020.”

“We must have some form of transitory policy to safeguard the interest of shooters. The Junior coaches have done a wonderful job and parents have played a very important role as well. This felicitation is a small gesture from the federation and the Juniors have earned it,” he added.