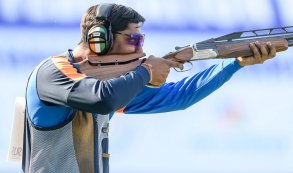 The 25-year-old shooter from Haryana has been in great form ever since he bagged a silver in season’s inaugural ISSF World Cup in New Delhi and followed it with a gold at the World Cup in Acapulco, Mexico.

In the finals, Ankur beat Khaled Alkaabi of the UAE 71-70 after shooting 137 in the qualification.

The Indian trio of Ankur, Sangram Dahiya and Mohd. Asab also claimed the team gold with a total of 415, eight points ahead of UAE while China won the bronze.

Sangram Dahiya shot the highest qualification score of 140 but eventually finished fourth while Asab finished fifth in the individual event.