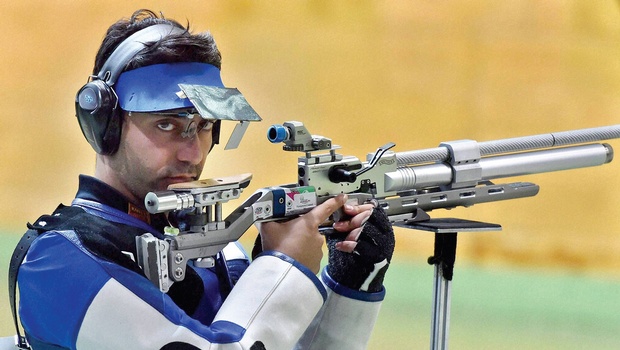 The 2008 Beijing Olympic gold medallist Bindra, who turns 33 on Monday, shot 208.3 to bag the top prize ahead of Kazakhstan’s world number eight Yurkov Yuriy (206.6) and Korea’s Yu Jaechul (185.3) on the first day of competition at the Dr. Karni Singh Shooting Range in New Delhi.

“A lot of training has gone into it. I am always trying to do the best I can. It may look easy but I can guarantee it’s very, very tough,” Bindra said after his triumph.

India’s rifle coach Stanislav Lapidus was never in doubt about Bindra’s chances in the tournament.

“There was no doubt about his result, I was expecting it, but with Gagan, it was different. He is preparing for the future,” Lapidus said.

Congrats @Abhinav_Bindra for shooting gold at Asian Air Gun Championship. @gaGunNarang played well too. Once a champion always a champion

Earlier, Satyajeet Kandhol started India’s proceedings with a gold in the Youth Men’s 10m Air Rifle. Satyajeet shot 204.8 in the final, just ahead of Chinese Taipei’s Lu Shao-Chuan, who managed 203.7. Iran’s Daavoud Abadi settled for bronze. In the junior category, Pratik Borse of India claimed silver with an effort of 203.9.