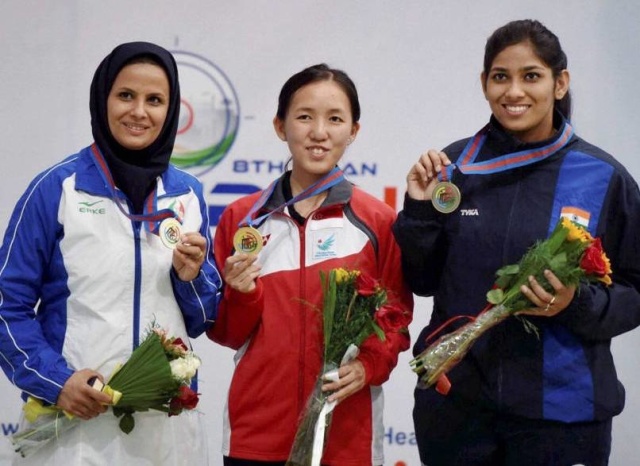 indianshooting.com predictions are coming true as far as the 8th Asian Airgun Championship, underway at the Dr. Karni Singh Shooting Range, are concerned. Coached by former India coach Laszlo Szucsak, the Iranian women’s team proved more than a handful for Indians as they walked away with the team gold in women’s 10m air rifle, relegating the hosts to second spot.

Though Iran’s victory did not come as a big surprise, considering they have been doing really well under Laszlo for the last five years, it definitely was a dampener for India who were expected to excel in home environs.

The Iranian team, comprising Elaheh Ahmadi, Mahlagha Jambozorg and Narjes Emamgholi, walked away with the top prize with an aggregate score of 1247.7 after the qualification round, while India, represented by the young Apurvi Chandela, Ayonika Paul and Pooja Ghatkar, notched up silver with 1241.4 points.

Later, in the battle for the individual medals in 10m air rifle, it was more of a battle between the techniques of two of the world’s best rifle coaches. For a moment it seemed, it was a contest between India coach Stanislav Lapidus and Laszlo, as they sat attentively, minutely observing their wards from behind.

In one of the keenest contests witnessed in recent times at the range, the Indians and Iranians fought till the very end with the lead changing hands after every shot. The first shooter to be eliminated was India’s latest shooting sensation and Olympic quota winner Apurvi Chandela. The 22-year-old started with a 10.8 but her 9.4 followed with a 9.1 pushed her down and she could not recover from there, finishing eighth with a score of 81.3.

The next shooter to get eliminated was Iran’s Mahlagha Jambozorg with a score of 102.7. India’s Pooja Ghatkar finished fifth with a score of 143.3 followed by Iran’s Narjes Emamgholi with 164.8. In the end, India’s Ayonika Paul and Iran’s Elaheh Ahmadi were left to battle it out for the gold along with Singapore’s Ser Xiang Jasmine.

Ayonika, who was ahead of Ahmadi in the last eight shots looked set to claim the second spot, but her shots of 9.6 and 9.0 cost her the silver, which was won by Ahmadi of Iran. Ayonika settled for bronze with a score of 185.0 which also included two perfect shots on 10.9. The Singapore shooter, Jasmine maintained her lead till the very end to claim the gold with a score of 208.1.

India turned out to be a happy hunting ground for the affable Singaporean as the last time she was here for the 2010 Commonwealth Games, she had won a double gold — both in the women’s 10m air rifle as well as her pet event, the women’s 50m rifle three positions.

Clearly delighted with the result, Ser Xiang Jasmine said, “I am very happy as this was a high-quality field at the Asian level and it definitely boosts my confidence before I resume my fight for a Rio quota at the Asian Shooting Championship in November.”

She added, “I have been missing the quota by the narrowest of margins and this event is great preparation before the last quota event for Asian shooters.”

Apart from Ayonika’s achievement, India had a gold and bronze through Aashi Rastogi and Prachi Gadkari in Youth women’s 10m air rifle, while Shriyanka Sadangi too claimed bronze in junior women’s category.

In the junior category, Sadangi shot 185.4 to finish third behind Iran’s Najmah Khedmati, who shot an impressive 208.9 to win gold with a world record score, while the silver was won by Fatemeh Karamzadeh (208.3), also from Iran.

Najmah, who has also clinched a Rio Olympic quota place, shot 208.9 to beat country-woman Karamzadeh, but the record would not stand due to the paucity of competitors in the event.