The 23-year-old Yashaswini’s feat was on the back of compatriot Visnu Shivaraj Pandian’s gold in 10m air rifle on the opening day of the two-day event.

Yashaswini was dominant from the start, registering the best qualification score of 577, and again led from the start in the final. Taking early lead after the first 10 shots in the 24-shot contest, she finished with 241.7 points to prevail over Egypt Ahmed Nabil by a convincing margin of 3.1 points.

Yashaswini, who had won gold at last year’s ISSF World Cup in Rio de Janeiro and a junior gold at the 2017 World Championships in Suhl, made it back-to-back titles as she had won gold in the 3rd and 4th editions of IOSC in May. 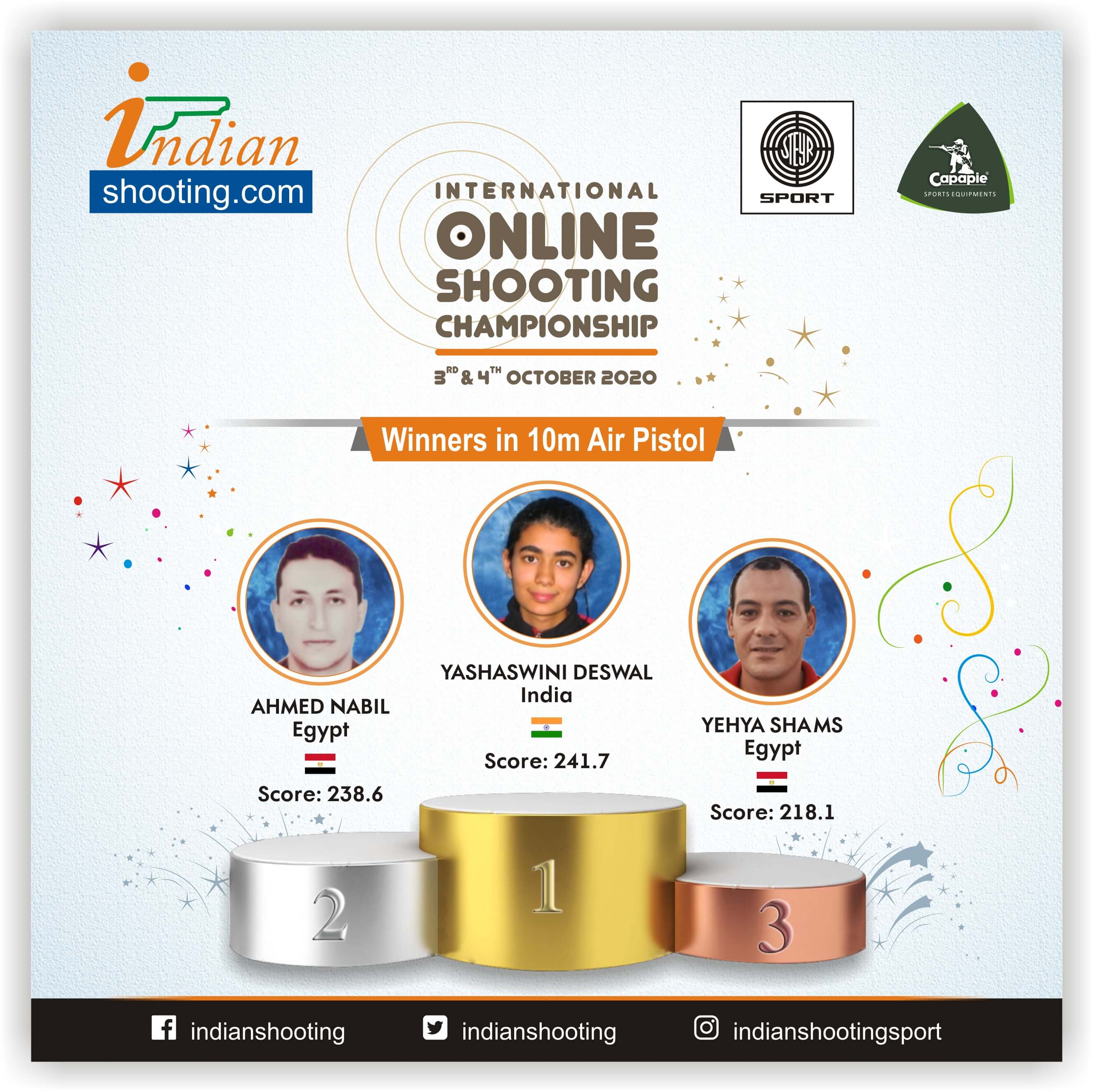 “Online shooting is a good platform to train and compete, especially in this Covid-19 era. I would like to thank indianshooting.com for organizing this competition,” said Yashaswini.

Nabil’s compatriot Yehya Shams took the third place with a score of 218.1. Sylvia Steiner, an Olympic quota winner for Austria, settled for the fourth place with a score of 197.1. The final was a high quality affair with some of the best in the business showing up. At 18, Kadek Rico Vergian Dinatha has a reputation of being one of Indonesia’s best, who has competed at the 2018 ISSF World Cup in Changwon, Korea.

After finishing a point behind Yashaswini in qualification, the fight for the top spot was expected to be between the Indian and the hugely experienced Sylvia, 38, who had stunned the shooting world by striking gold at the 2017 World Cup in Gabala. It was her maiden appearance in the final of an ISSF event. But that was not to be as the Egyptians were the better shooters on the day, and were expectedly thrilled by the 2-3 finish after holding nerve when it mattered.

Disappointed, Sylvia, who has been shooting since 1992, took positives from her debut in an online competition. “I am satisfied with the qualifying score but not with the final, and will need to improve,” she said.

Shooters from 15 countries participated in the two-day competition, a brainchild of former India shooter Shimon Sharif. “This is the biggest among the five editions of IOSC organized by us so far. We had shooters from 15 countries this time. I am happy that online shooting is becoming more and more popular among the shooters. This is the future of our sport,” said Sharif.