The sign of a quality player and team is that there is no let-up in intensity despite the situation, but in a high-intensity sport like shooting a relaxed body and mind are critical for success. Full marks to the Spanish Chanos for turning up and giving their best against the French Frogs, but the strain of competing in an event organised by the Spanish Shooting Federation on Sunday morning seemed to have taken a toll as they lost 10-5 which let the unbeaten French Frogs take the top spot in Group B of the World’s first Online Shooting League.

The last match of the group stage was only of academic interest as both the teams had already entered the semifinals, but it was to the credit of Juan Cecilia that he emerged the shooter of the day. This was after competing for three hours in 50m rifle three positions, considered the toughest in the sport, and then undertaking a 45-minutes drive to the 10m range in Barcelona from where they competed against the French within half hour of arrival. With the best total score of 155.7 in the match which lasted 15 shots, the 19-year-old did not score less than 10.1. Teammate Mireia Rossello was also part of the morning competition and started with a perfect 10.9 against the French, but concentration became an issue as the match progressed with her scores plunging on crucial shots. Mireia’s inconsistency and Sofia Sanz Del Pino’s poor scores throughout, allowed the French Frogs to fight back from 4-1.

For the first time in the ongoing league, the team trailing equalised and then took a lead that proved decisive. The French won six straight points to make it 7-4 and conceded just one more point on the 12th shot before wrapping up the match in the next three shots.

A key factor in the win was the inclusion of Jade Bardet in place of Lucas Kryzs. With a junior silver in the ISSF World Championship, the 19-year-old recovered from a shaky start to be an asset to teammates Dimitri Dutendas and Nicolas Mompach who were steady safe for the odd poor shot. Teammate who doubled up as the manager Etienne Germond was full of praise for Jade as “she had trained throughout the lockdown” but the shooter said she found the going tough. Relieved that his teammates did the job, Nicolas was unhappy with his scores on the day.

Renowned Spanish coach Luciano Porto denied that fatigue was a reason behind the loss as his shooters were used to a long day but had to call for a timeout when the score read 5-4 in favour of the French. His advice to them was to get their position right, focus on breathing and stay confident, but by then the French had got into the groove.

All the group stage matches are over and the four teams through to the semifinals are Italian Style, Austrian Rocks, French Frogs and Spanish Chanos. The semifinals are scheduled on July 18-19. The final is slated for July 26 and will be preceded by the third-place match a day earlier. 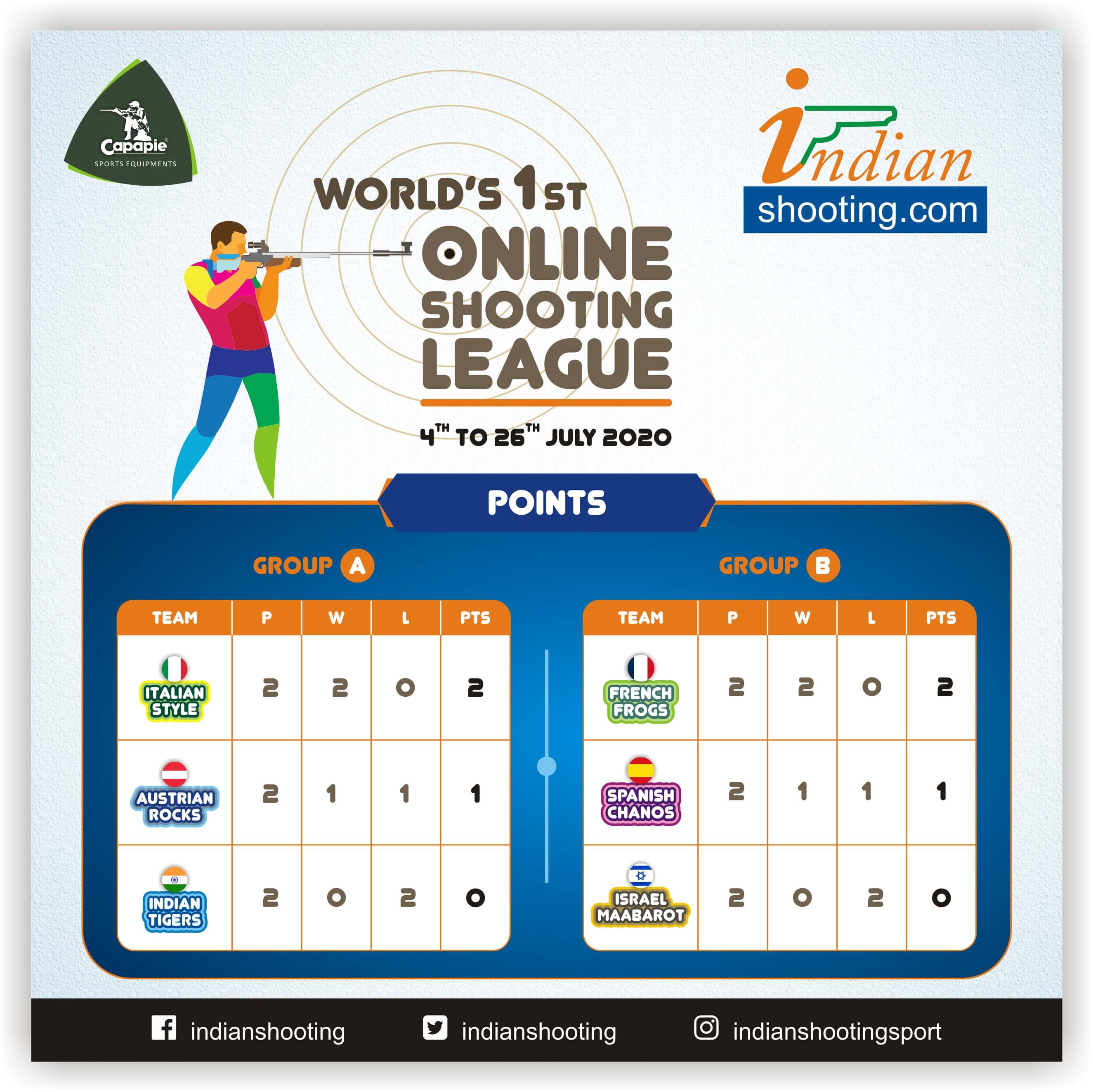