With each passing edition, the International Online Shooting Championship (IOSC) is getting better, and proof lies in the pulsating 10m air pistol final on Day 1 of the 6th edition of IOSC on Saturday. It was a see-saw battle which saw fortunes swing wildly. Indonesia’s 18-year-old sensation Kadek Rico led till the 18th shot but sent shockwaves by crashing out after the 20th shot to finish fourth.

At this stage, Olympic quota winner Sylvia Steiner of Austria was on the brink of elimination but bounced back strongly after the 20th shot. There was no looking back as she went on to run former African champion Ahmed Esmat of Egypt and was just 0.1 point behind before the last two shots but eventually finished second with a total of 238.8, a point behind Esmat. Hlib Kihitov of Ukraine was also impressive and finished third with 218.3. The 20-year-old Hlib, who had won a junior gold at this year’s European Championship in Wroclaw, Poland just before the pandemic, shot the best qualification score of 579.

The pedigree of the three medallists came to the fore and also the fact that Steyr air pistols played a key role in their success. It was a mixed day for Sylvia as she was upset with her show in the qualification but made up with the late rally in the final. Languishing way down after the 18th shot, Sylvia said focusing on technique over the next two crucial shots and shutting out everything else helped the 2017 ISSF World Cup gold medallist at Gabala, Azerbaijan claw back. Sylvia had finished 4th in the 5th IOSC.

Esmat, 32, who had finished 7th in the last IOSC, was in a different league on Saturday. “I started well but then had some crazy moments in the middle. I put my mind on the job and process again and finished well. It (form) is good and I hope it (IOSC) can be held regularly even if the World Cups are back after COVID-19 because it gives us the opportunity to test ourselves,” he said. Esmat claimed gold at the 2017 African Championship in Cairo, Egypt and also holds the national record of 583. 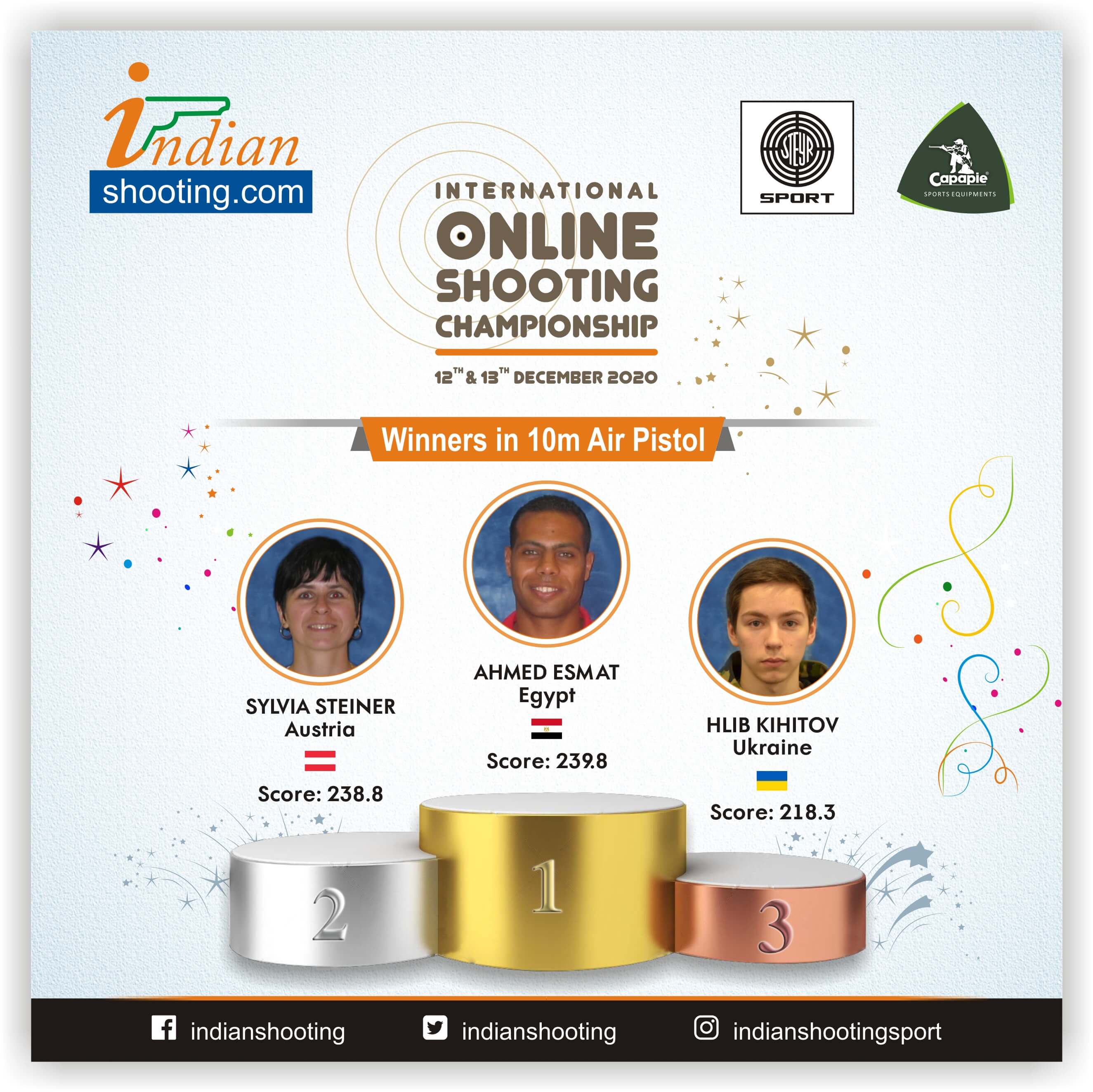 For the third-placed Hlib, the IOSC was valuable training as well. “I’m glad I could take part in the competition and the scores were good,” he said while acknowledging the contribution of Steyr. “It is because of them that I am the junior European champion.”

For the second edition running, Steyr Sport has associated itself with IOSC, and this is a validation of the growing stature of this online competition organised by indianshooting.com.

The renowned Austrian gun manufacturer first came on board for the 5th edition in October and the 6th IOSC again has the support of this iconic company with a rich history of producing champions across global competitions. Steyr has dominated pistol events at the Olympics since 1992. The company’s record at the sport’s biggest event is mindboggling. Starting from Barcelona 1992 to Rio de Janeiro 2016, athletes using Steyr air pistols have bagged 26 medals, nine of them gold.

Closer to time, the company is also proving its worth in rifle events with the success of top shooters like Martin Strempl, Bernhard Pickl and Etienne Germond. The three have been very impressive at the month-long Online Shooting League (OSL) and in the earlier five editions of IOSC.

Steyr’s presence is getting stronger as the IOSC gains popularity, and the sixth edition has the presence of 30 shooters who either use Steyr pistol or rifle.

When action shifts to the 10m air rifle on Sunday, there will be lots to look forward to as the Olympic quota winner Martin and compatriot Berhard Pickl will mount a serious challenge. Pickl is a two-time European Champion and had also won silver at the 2018 ISSF World Cup in Guadalajara, Mexico. Frenchman and World No.27 Etienne will be another big name from the Steyr stable to take aim on Sunday.