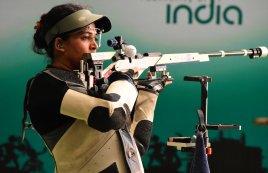 Tejaswini of Maharashtra, who had lost the gold to her coach Kuheli Gangulee in the prone event on Saturday, shot 454.7 to pip Aditi Singh of Haryana by 1.3 points at the Dr. Karni Singh Shooting Range.

Dilreen Gill of Punjab who topped the qualification round with a score of 581 won the bronze ahead of veteran Anjali Bhagwat.

In the Men’s 25m Standard Pistol, Amanpreet Singh of ONGC won ahead of Mahaveer Singh after both were tied on 572.

Anish Bhanwala from Haryana, who had won the men’s rapid fire gold on Saturday, continued to impress by winning the junior gold in standard pistol with a score of 568.

Anhad Jawanda of Punjab shot 562 to win the silver while Shivam Shukla of the Air Force shot 558 to win the bronze.