The controversy refuses to die down despite the passage of time. After all, Manu Bhaker’s pistol malfunction during the Women’s 10m Air Pistol at Tokyo robbed India of a possible Olympic medal.

What ensued after Manu failed to make the final due to the glitch was an outcry and a public spat between her Swiss gun manufacturer, Morini, and national pistol coach Ronak Pandit.

We break up the ugly episode at the Asaka Shooting Range to make the issue clear for our readers.

How did the problem start?

During the qualification, Manu’s pistol got stuck after the 16th shot with the 19-year-old left with 44 shots, which had to be fired in 55 minutes. At that point, she was 4th (the top 8 make the final), but the forced break and ensuing repair meant she had 38 minutes to complete the round. As per Olympic rules, time lost in such situations is not compensated. By the time Manu completed the next series of 10 shot, the rest of the field had finished the fourth series (there are six series).

What could Manu do at this stage?

Manu could have used the spare pistol from the same manufacturer, but she did not go that way. Getting the malfunctioned pistol rectified was the other way.

According to Morini, the Indians could have brought the pistol to their repair station outside the shooting range. A post by the company on Facebook stated, “Morini technical repair place at the Tokyo Olympic Games. For people that don’t know where we are, we are at the left of the weapon deposit office.”

It was a barb at the Indian camp and Ronak dismissed the post as an unviable option. To prove the point, he uploaded a video to show the distance between the range and repair station and said more time would have been lost had the pistol been taken out of the range.

Why did Morini start the debate?

The company claimed repair would have been faster had the pistol been brought to them. Francesco Repich of Morini put out a statement on Facebook claiming the company had spoken to the Indonesian judge who presided over the event. According to the judge, the pistol had a “slightly loosened charge screw” and Ronak took 10 minutes to fix it. Repich claimed experts would have taken lesser time, and that the Indians did not take sighting shots after the problem was fixed. 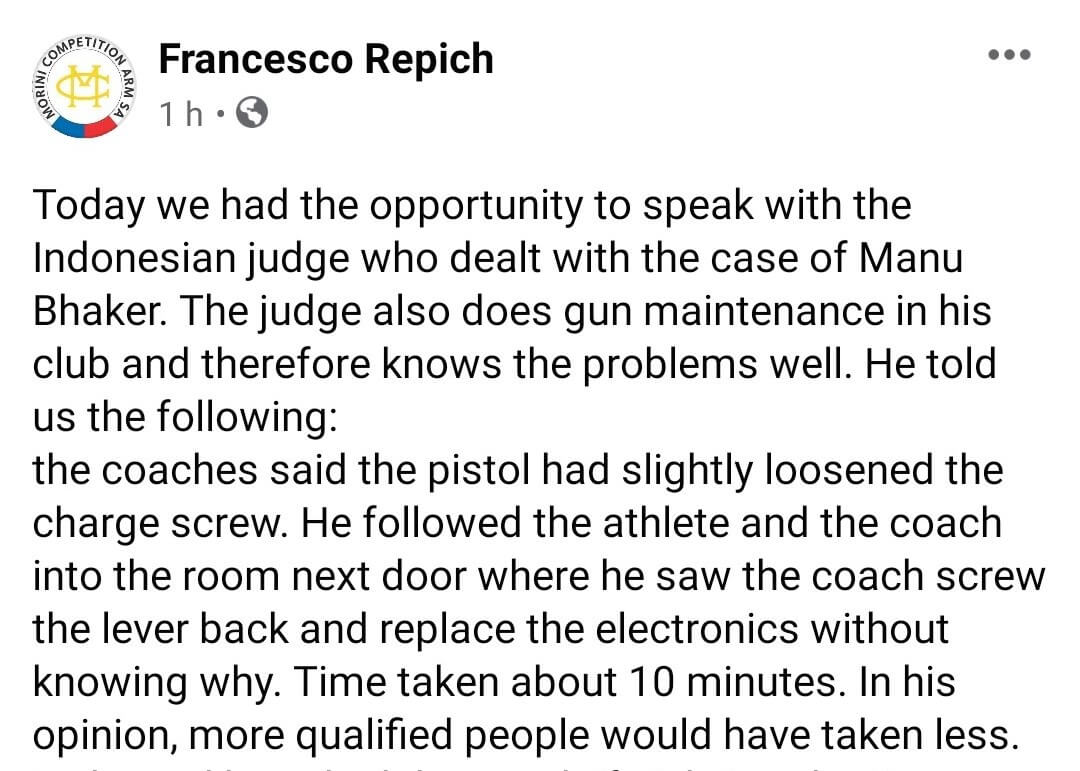 Ronak took on Morini’s argument in a video on Facebook that dwelt on three aspects. The distance from the lane where Manu was shooting was a brisk walk from the door outside the hall. From there, it was another short walk to the Morini repair stall.

His second argument was had Manu chosen to get the pistol repaired by the manufacturer, would she have been in a state to compete again? “You think her heart rate would have been stable after walking so much to get the gun repaired. Which idiot is saying that?”

The coach also clarified why Manu did not use the reserve pistol. “As for the spare pistol, her previous coach had changed the grip of that pistol, she was not comfortable with it and that is why she stuck to the one which malfunctioned.”

The episode has also brought forth the strong undercurrents within the NRAI.